Long Barrows are fairly scarce on the northern North York Moors, this is round barrow country. Newton Mulgrave and the surrounding moors are rich in prehistoric monuments, the dales running down from the moors to the coast are fertile and well drained, ideal for early farmers. A number of the barrows, including the Long Barrow are placed at points where they can be seen from the dale below, the ancestors looking down from the place where the land meets the sky.

In the past, the moor was a rich hunting ground for early antiquarians, especially, Samuel Anderson of Whitby. Anderson excavated many of the barrows on the moor and built up a large collection of prehistoric pottery. He eventually sold his collection to finance a new business manufacturing jet ornaments. Much of his collection was sold to Joseph Mayer of Liverpool for £150. He also gave or sold some of the pottery to the Mappin Art Gallery in Sheffield.

Anderson’s pots in were displayed in the Liverpool Museum as part of the Mayer Collection, the museum and many of the displayed pots, were destroyed during a German bombing raid in May 1941.

The Long Barrow is recognisable but has suffered historic damage, that said, it’s well worth a visit. The walk takes you across a lovely grassy moor with views to the coast and a moorland skyline dotted with mounds. Below is a description of the barrow taken from the English Heritage Record of Scheduled Monuments.

The monument includes a long barrow situated in a prominent position at the top of a north east and north west facing slope on the edge of the North York Moors. The barrow has an earth and stone mound which is ovoid in shape, with its long axis oriented ESE to WNW. The mound measures 36m in length and is 13m wide at the west end and 20m wide at the east end. It stands up to 2.6m high at the east end, with the top sloping down towards the west. On the top of the mound and on the north side there are a number of small hollows caused by the robbing of stone from the fabric of the mound. Originally the mound would have been narrower and trapezoidal in shape with flanking quarry ditches up to 3m wide along its north and south edges. However, over the years erosion and stone robbing have resulted in a more rounded shape and soil has slipped from the mound, increasing its width and burying the quarry ditches which are no longer visible as earthworks. There would also have been a forecourt area up to 10m wide in front of the east end of the mound where rituals connected with the use of the barrow would have taken place. There is nothing of this visible now, but archaeological remains will survive as subsoil features. The long barrow lies in an area rich in prehistoric remains, including further burial monuments. 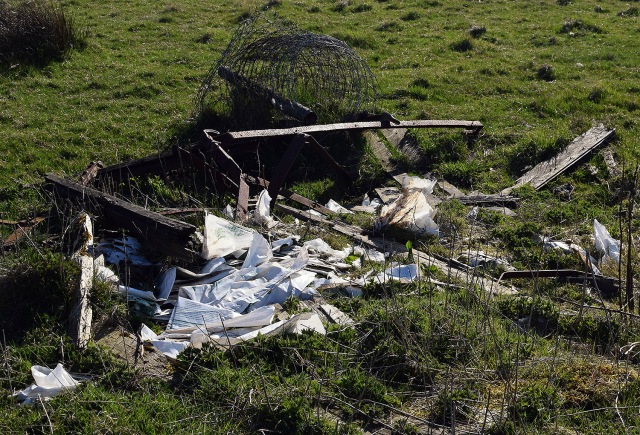 This is on the open moor a few meters from the Long Barrow and a good walk from any road. The moor is a managed moor, the fences are in good order, the grouse butts are well maintained yet this is tolerated. Sometimes there seems to be two rules in the countryside, one for the visitors and another for the landowners and farmers.

2 thoughts on “Newton Mulgrave Moor – A long barrow, an antiquarian and some rubbish”