The rain has stopped, it’s time to get back onto the moors.

Gerrick Moor has a number of significant prehistoric monuments, a couple of good-sized barrows, a couple of hut circles, a late prehistoric enclosure and a cross dyke. All of this sounds very impressive but most of the features are quite subtle and take a little seeking out. There has also been a lot of  later disturbance on the moor, it is riddled with old trackways, drainage ditches and grouse butts. The moor was also used as a tank training site during World War II.

The most prominent feature on the moor is Herd Howe, a large Bronze Age burial mound. The mound is situated on a ridge, best seen from the A174 heading east.  The barrow is intervisible with a number of prominent prehistoric sites, The Black Howes to the west, Warsett Hill and Street Houses to the North, Skelder Hill (thanks Chris) and Danby Beacon to the East and views into the central moors to the south. 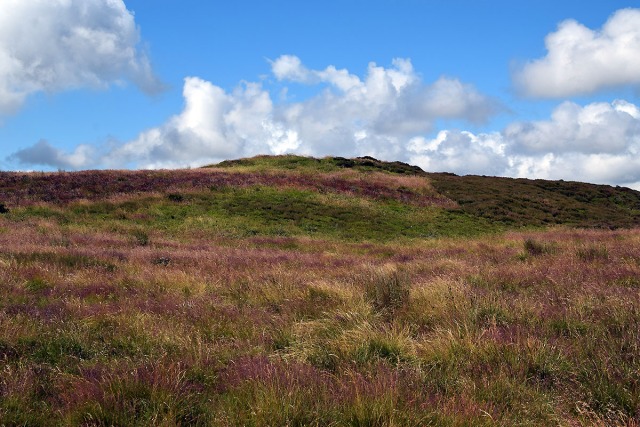 In the pit Atkinson found the remains of eleven cremation deposits and fragments of seventeen vessels, one of which was accompanied by a stone battle axe.  Other finds included pottery vessels, flint tools, two bone pins and a bone needle.

On a gently sloping area just below the mound is a banked enclosure. This enclosure has been interpreted as a late prehistoric enclosed settlement similar to the settlement at Box Hall.

Raymond Hayes recorded thirty six examples of these small rectilinear enclosures across the North York Moors.  Once you located it’s not difficult to trace the boundary bank, it is mainly covered in Bilberry and stands out quite well against the background of heather. The bilberries are just coming out at the moment and are sweet and juicy, a welcome snack.

I headed off across the moor to check out the Cross Dyke that runs NW-SE for about three hundred meters. The dyke comprises a  It a pair of banks with a central ditch running from the Tank road to the where the land starts falling off into Gerrick Haw.

Cross dykes are thought to a prehistoric territorial boundary. There are a number of similar dykes across the North York Moors, Blaise Vyner records at least fifteen, many of which are associated with prominent burial mounds. It is not unreasonable to speculate that these monuments had a ritual function. 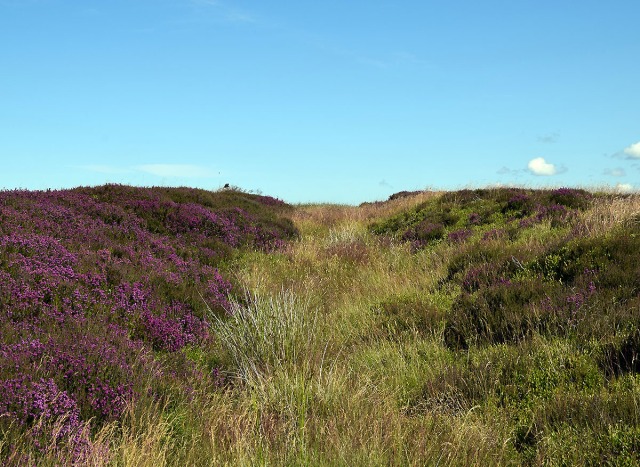 The heather has just come into bloom on the south facing bank. 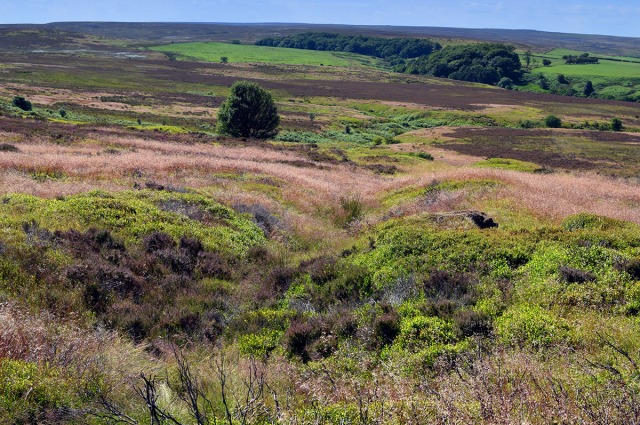 Looking down to the northern end of the dyke into Gerrick Haw towards Dimmingdale with Moorsholm Moor and the Black Howes in the distance.