On a beautiful clear day, Graham and I took a wander up to the Stone Circle on Barningham Moor. We stopped at the Frankinshaw How cairn to drink in the views to the distant Cleveland Hills and Teesside. The cairn, with its cup-marked kerb stones, doesn’t appear to have any statutory protection, this is a worry as it is close to an estate road that has recently been used by heavy vehicles and not too far from a road stone quarry. There are also signs that turf has been stripped close to the cairn, presumably to top the nearby shooting butts.

We moved on to the slowly-sinking, messy Stone Circle at the head of Osmonds Gill, the viewshed here is to the north across the upper Tees valley towards the Durham plain.

Walking over to Eel Hill, we cross a low, dry valley and encounter the best fairy ring that I have ever seen.

Eel Hill, I have visited this beautiful carved stone many times and have never once been able to walk straight to it. I’m convinced that it moves around the hilltop.

We head off to explore Holgate passing these lovely shooting butts. I’m no fan of driven grouse shooting and wouldn’t care if another butt was ever built, but I do love these earth and stone built structures. With their construction and alignments, they have a prehistoric soul. These butts won’t be seeing much service this year. Later we hear a different sort of gunfire, the pom pom of artillery from the nearby military ranges.

At Holgate, we search for carved rocks amongst the boulders that litter the terraces below Holgate Howe. After four thousand years of upland Yorkshire weather and the acid rains of the industrial era, it amazes me how any of these carvings have survived, I also wonder about what has been lost.

Some of the boulders, including some with carvings on them, have been quarried by local stonemasons. The method of removing a stone, suitable for use as a gatepost or lintel, is to cut a series of linear holes across the stone, it is then left to allow nature to assist with the work. The process of freeze/thaw will eventually weaken and fracture the stone along the line, the stone can then be more easily cut. There are a number of quarried stones laying around that have not been used.

This large flat boulder has been quarried along one edge. The stone has a number of weathered cups on its surface. The cups have been joined up with a thin, sharp, incised line. Perhaps this was the work of a bored stonemason who noticed the ancient cups and spent his tea break trying to make some sense of them.

We finish the day at this lovely earth-fast boulder which was thankfully spared from the attention of the stonecutter. 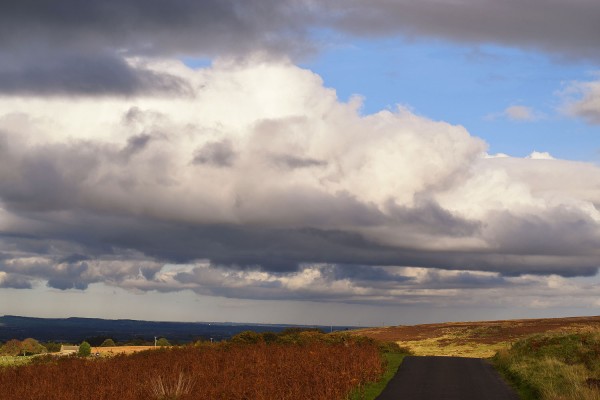 Light constantly changes as weather moves rapidly from the west 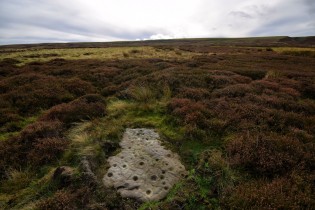 A stoat tracks my progress across the moor 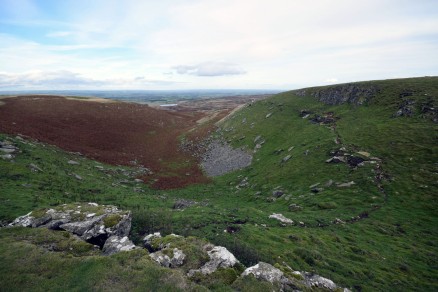 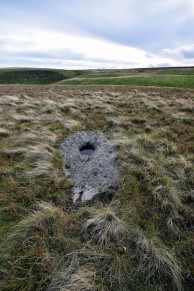