We took a drive up to Northumberland to visit the most northerly English Stone Circle, Duddo aka The Singing Stones aka The Women.

Whilst in the area we dropped in at a couple of Prehistoric Rock Art sites. First stop was Roughting Linn where ate our lunch down besides the lovely waterfall. We then walked through the bluebell-clad ramparts of the ancient promontory fort to the large outcrop in the woods. The Fell Sandstone outcrop is covered in Prehistoric rock carvings and is the largest carved rock in Britain. The most of the carvings have been placed around the edges of the outcrop and have been compared to Irish Passage Grave Art.

This part of Northumberland is littered with Prehistoric Rock Art sites, most have wonderful views over the nearby fertile valleys. Many sites are intervisible with each other, quite a few also have nearby earthworks which have been interpreted as Iron Age in date. The carvings themselves are thought to be Neolithic/Early Bronze Age in date, the relationship between the carvings and the earthworks is not fully understood but it does indicate that these sites had a degree of continuity lasting for a considerable period of time.

We headed over to Weetwood Moor to check-out the carvings on the outcrops there before moving on to Chattonpark hill and the wonderful Ketley Crags, a Prehistoric Rock Shelter, its floor covered in deep cup and ring carvings.

On such a night the hills dissolved

And re-assembled in a shifting mist,

We learnt that silence was not hostile,

Took upon ourselves its deepest strength

A moon that placed

As crow’s shout cracked the sky

Fled from the triggered bird-song

Before our eyes, a second birth,

Green and blue and gold.

Fluted stones whose shape had shifted

Buried to the hips,

Reclaimed their circle and identity,

As the sun’s diurnal course

Solstice: Duddo by Stan Beckensall from Northumberland Power of Place. 2001

Danby – Village of the Danes

If you have an interest in history Danby Rigg is a great place to visit. It was a busy place in the past,  the northern end of the Rigg is covered in prehistoric cairns, low walls, embanked pits, hut circles and dykes. There are also Medieval features including the Viking-Age Double Dykes, iron bloomeries and trackways. Many of these features are quite subtle, especially where the heather is long, but once you get your eye in you begin to spot them everywhere, trying to make sense of them is a different matter. 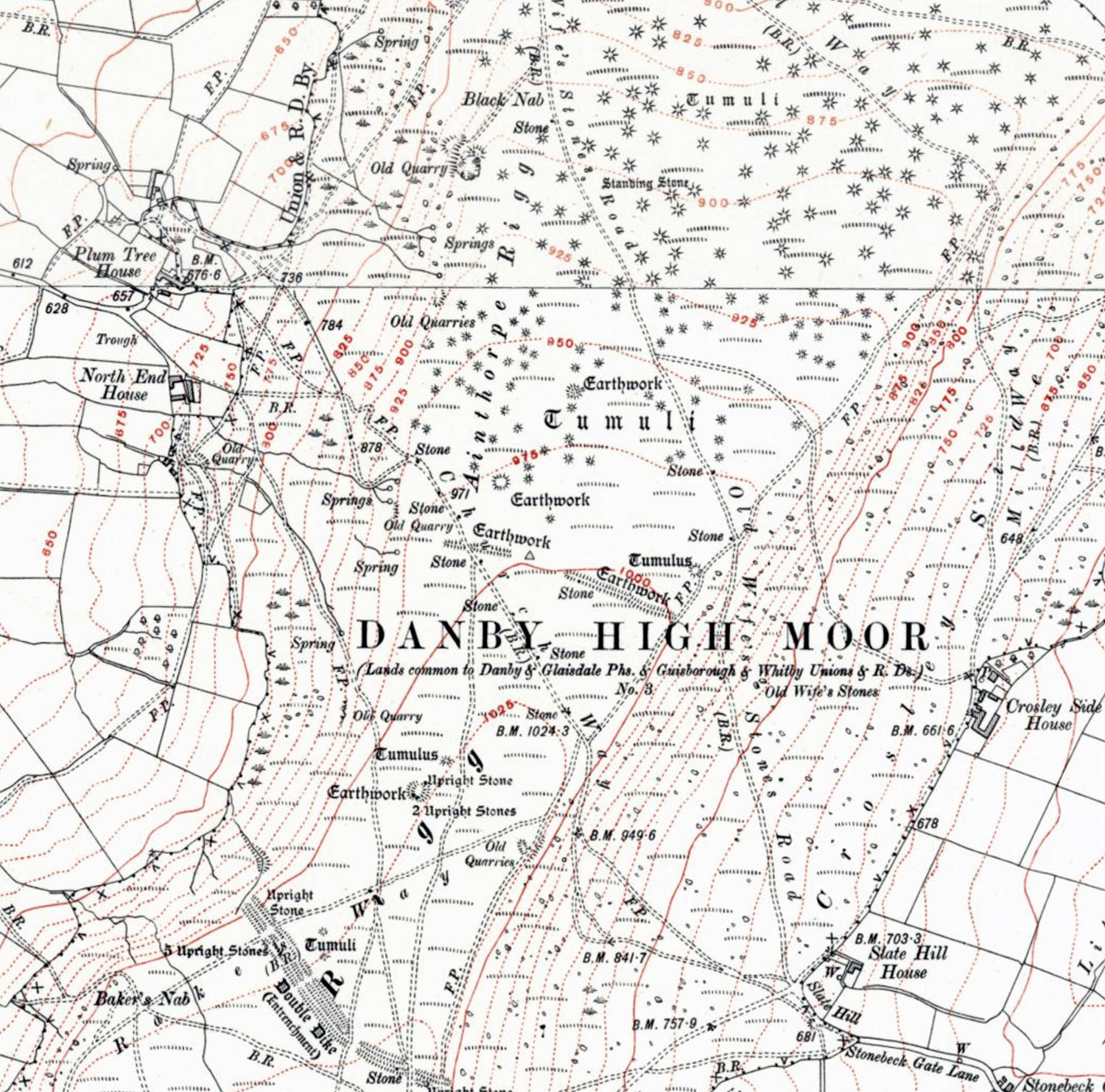 The Rigg is also rich in folklore with the Old Wife’s Stones and a Corpse Road which leads from Fryup Dale across the Fairy Cross Plain to St Hilda’s Church in Danby Dale. The dales around the Rigg are littered with tales of Hobs, Spitits and Witches.

Many years ago, when I first started visiting the Rigg, I was overwhelmed by the amount of prehistoric remains that could be seen. Over the years I have learned to focus my visits on one or two features and try and work out their relationships to the landscape.

On this visit I decided to take a look at a natural feature called The Hanging Stone. On my way to the stone I thought I’d have a quick look at the Old Wife’s Stones and a large circular monument close to the Double Dykes. It was a blistering hot day with barely a breeze, following the Old Wife’s Stones road up the side of the Rigg, I realised that midday was probably not the best time to be doing this. 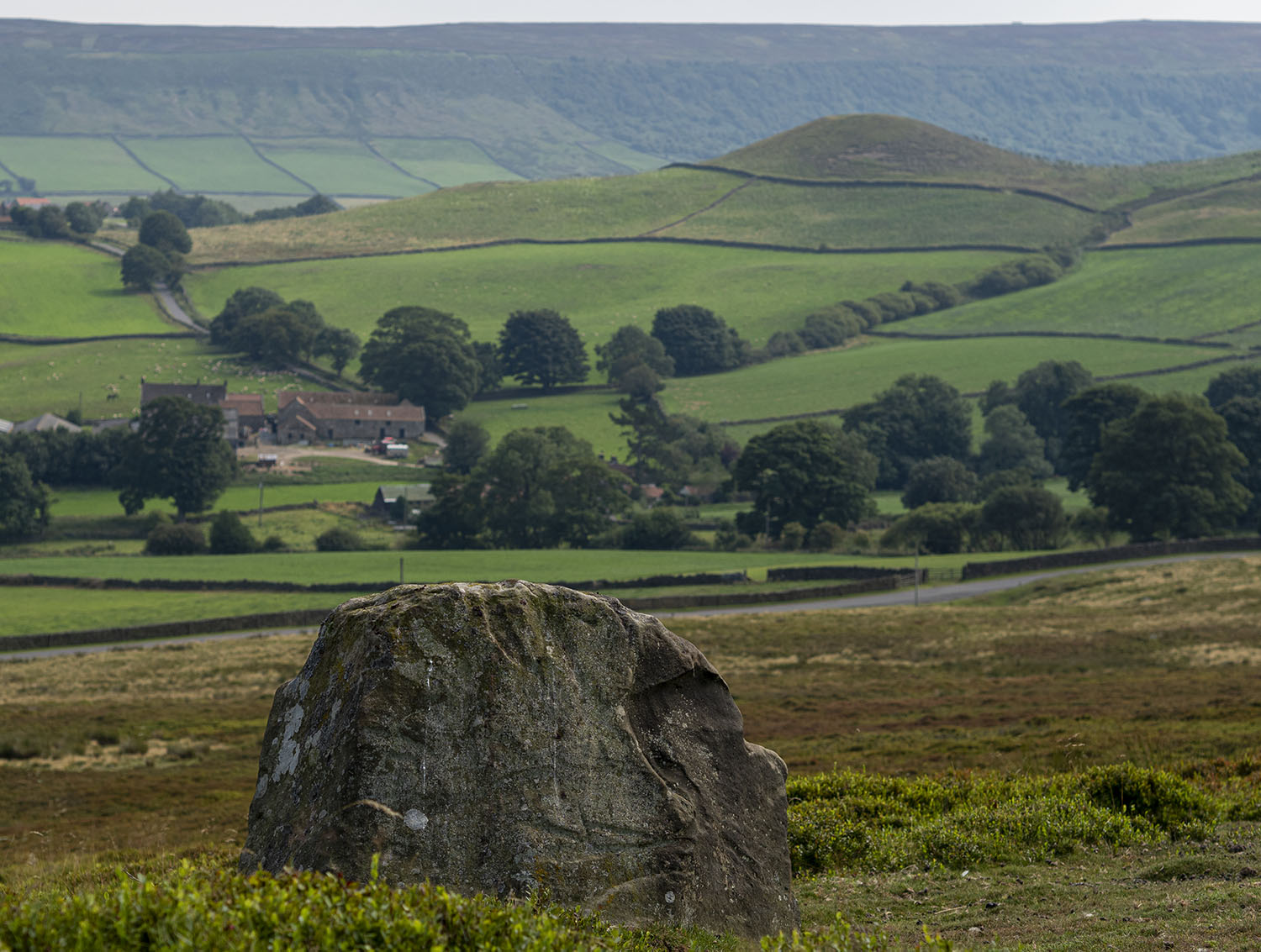 On old OS maps the Old Wife’s Stones are shown as a pair of stones, today only one remains. It sits close to the Old Wife’s Stones Road at the base of the steep scarp and overlooks Little Fryup Dale, the Fairy Cross Plain and Round Hill. On the image above the road running off to the top left follows the route of the Church Road also known as The Old Hell Road, a late Medieval Corpse Road that runs over the Rigg from Fryup Dale to St. Hilda’s Church in Danby Dale.

Just to the north of the Double Dykes is a large circular monument. The ring has a diameter of approximately 20 metres, it comprised of a low stone-built ring with a possible northern entrance.

This site was interpreted in the past as a settlement site. It was originally excavated by Atkinson in 1863. It was excavated again in 1956 by W.H. Lamplough and W.P. Baker and then re-examined by A.F Harding and J. Ostoja-Zagorski in 1984.  Harding’s conclusion was that it was an Early Bronze Age, Ring Cairn, one of a number of similar monuments that run across the Rigg.

Walking on to the Double Dykes, a number of fairly low upright stones can be seen along the earthwork. 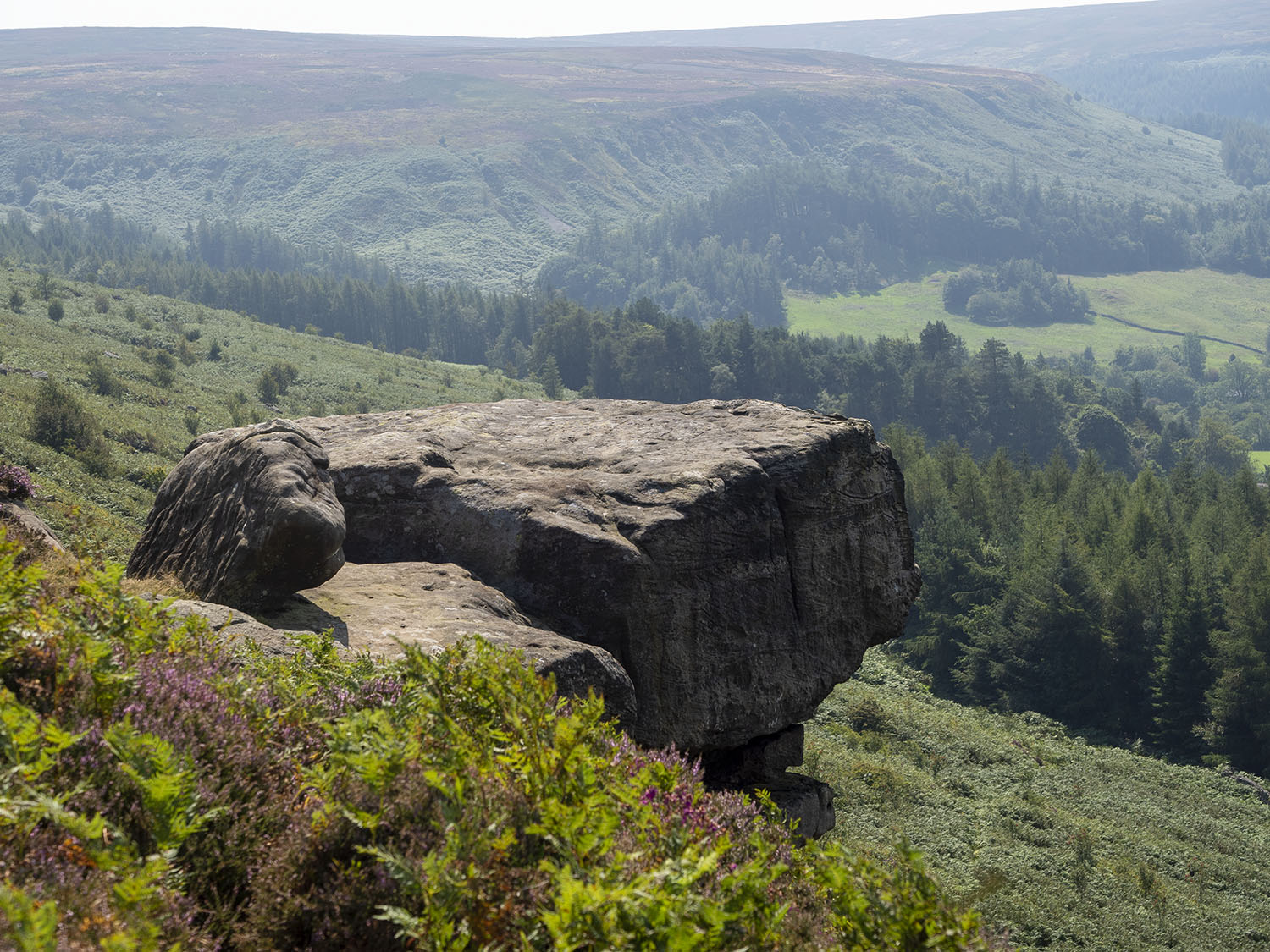 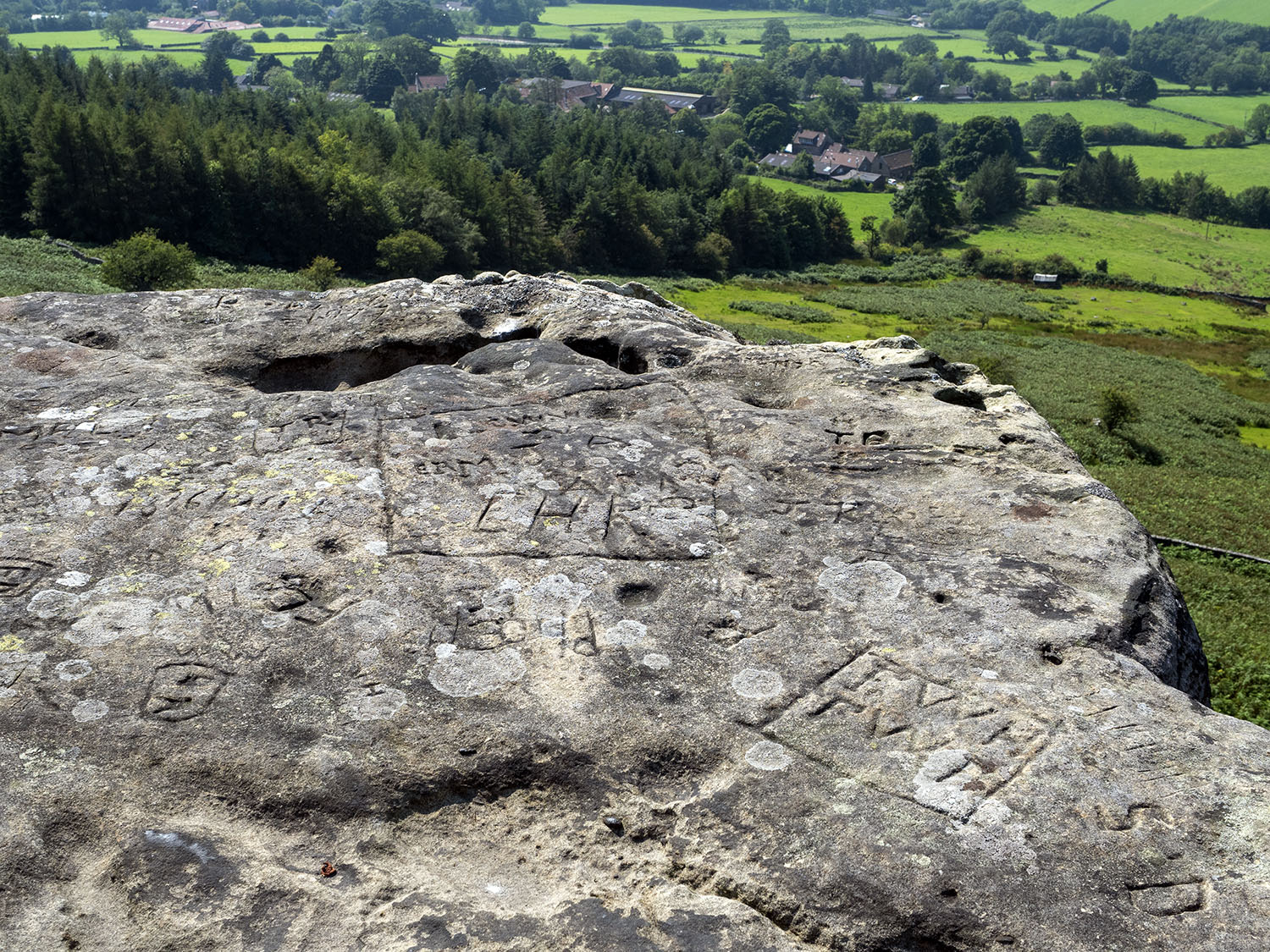 The Hanging Stone sits on the scarp edge of the Rigg overlooking Danby Dale. The rock itself is part of the Dogger Formation, a group of sandstones formed in shallow seas 170-174 million years ago. The stone is covered in graffiti, there are also a number of cup marks, one of which shows signs of being pecked. Given the amount of modern graffiti on the stone it is impossible to say whether the cup marks are prehistoric or modern.

The Place Names of the North Riding of Yorkshire. A.H. Smith 1928

Maps reproduced with the permission of the National Library of Scotland

Who could resist visiting a place with such a wonderful name?

I first visited this place in 2004, at that time very little was known about this strange oval earthwork. The site, on the margins of Brackenber Moor, has since been the subject of an Archaeological investigation by the Appleby Archaeological Group and North Pennines Archaeology.  They have concluded that the site, and a number of burial mounds located across the moor, are Bronze Age in date.

On the ground there is very little to see. The surrounding moorland is a mix of rough pasture and a golf course. The site occupies a spit of land overlooking the George Ghyll. The ditch and bank are visible and there are a few lumps and bumps within the enclosure. What excites me about this place is the beautiful red sandstone crag and cave located on the edge of the Ghyll. 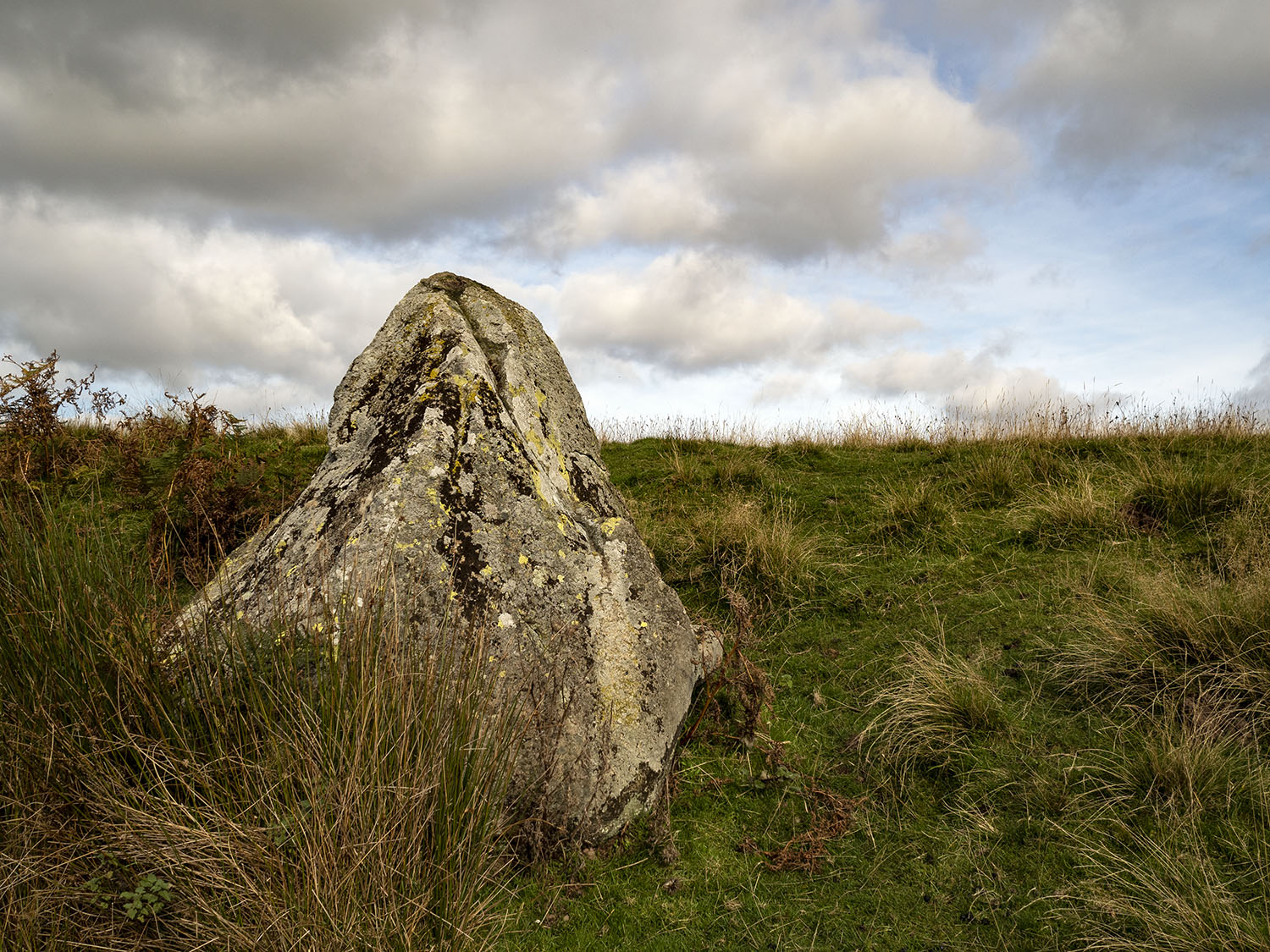 Dropping down to the Ghyll just beyond a large standing stone 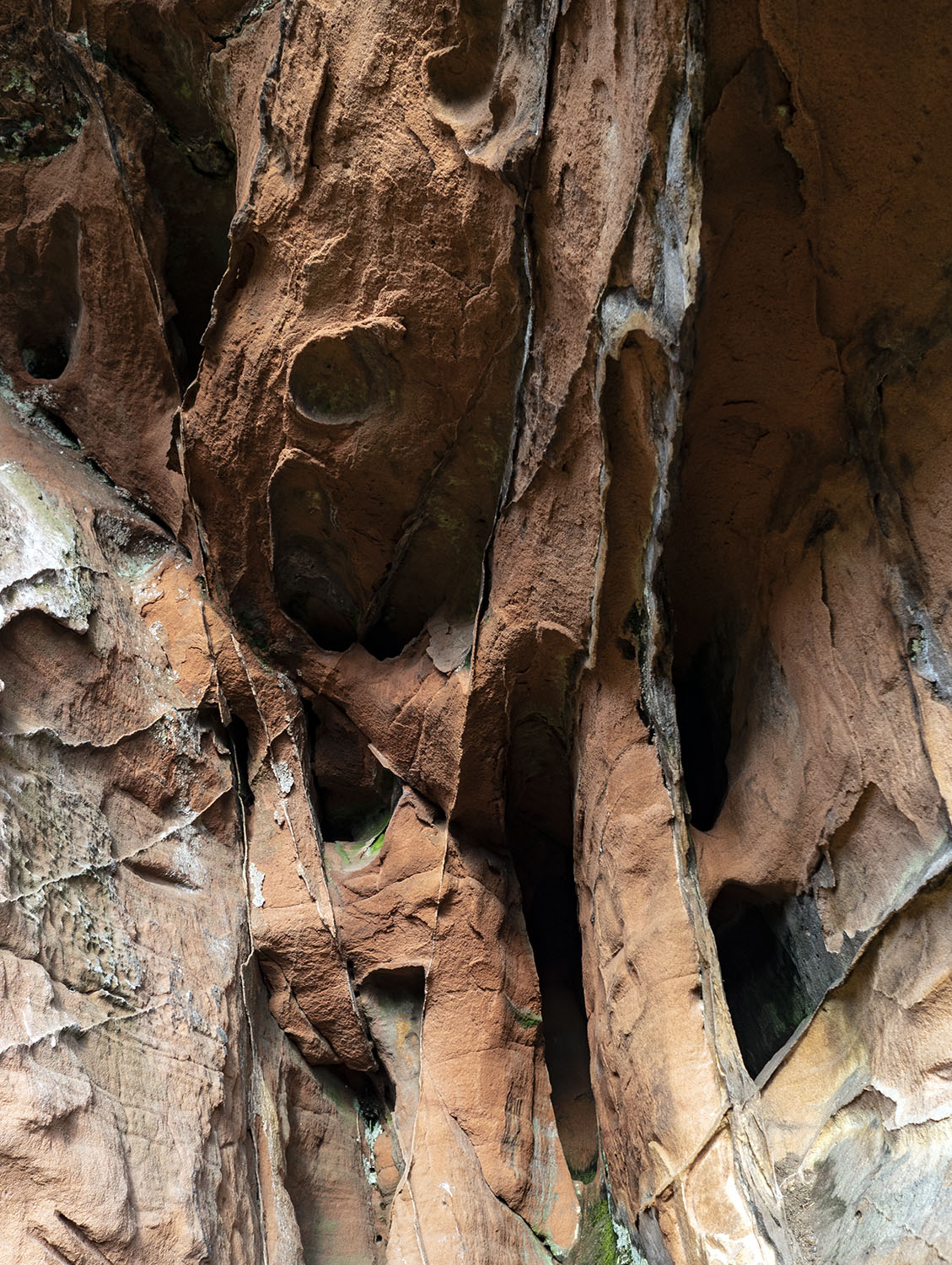 Aeolian (wind-blown) in origin, the Permian Penrith Sandstone Formation formed approximately 272 to 299 million years ago in a desert environment

The main cave could easily house two or three people comfortably. There are many birds nests in the niches in and around the main cave. 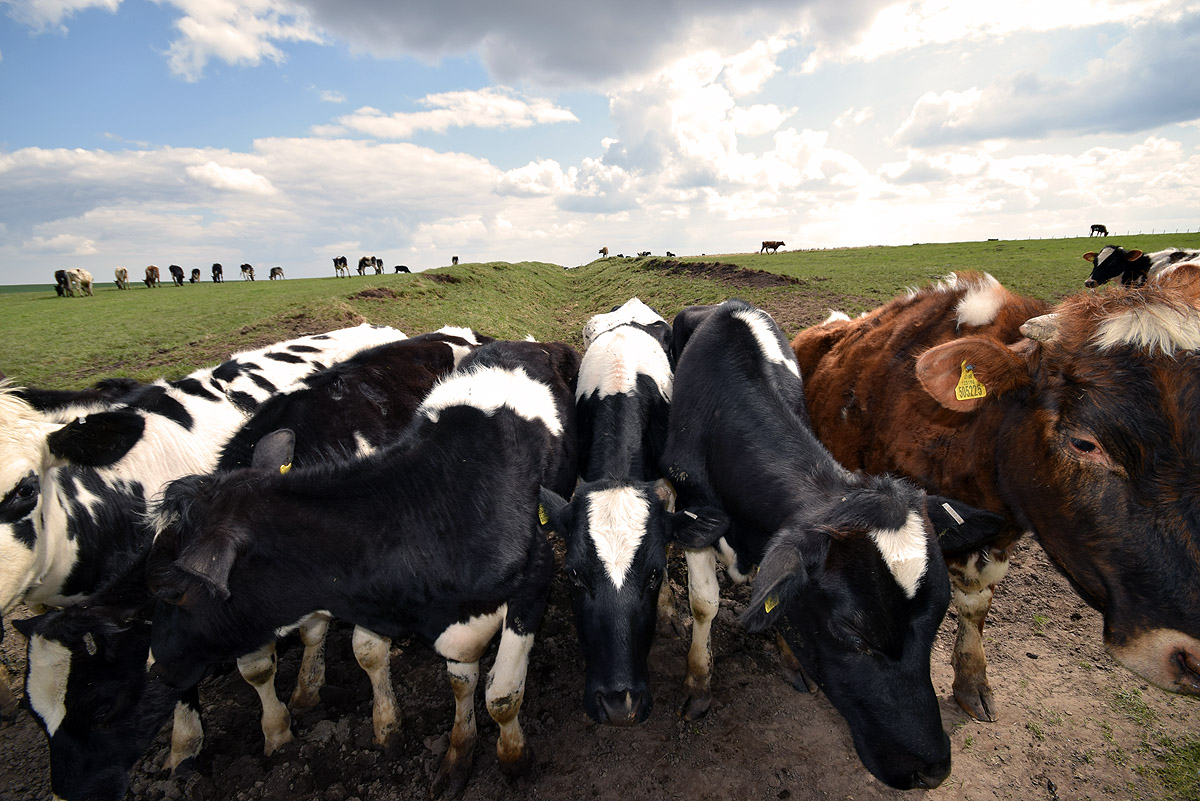 No Beltain fires today, the cattle will have to fend for themselves.