Heading west from Great Salkeld towartds Dacre, I called in on an old friend, the Skirsgill standing stone. Tucked away on an industrial estate, the huge stone is almost lost in foliage, not a bad thing perhaps. I took this picture of the stone in 2004

The slab-like shaft is complete, as is clear from the presence of both upper and lower border mouldings to the panels on sides D and E. The edge of the head on face A and all faces of the shaft were bordered laterally by a roll moulding.

A (broad): At the top and bottom of the shaft is a border formed by a single incised line; two wavering parallel lines divide the two panels on the shaft. On the head are remains of interlace of unidentifiable type. At the top of the shaft is a backward-turning contoured quadruped with a small scooped ear; the ground around the animal has not been cut back. Below are two human figures, the larger to the right, whose hands are joined over a rectangular object with two pellet-like legs. Between their heads is a cluster of three pellets. The ground to the right of the figures has not been cleared completely but sprouts curling or circular branches.

Below the left-hand figure is an uncarved area shaped like a boat, which partially separates this scene from the one below which contains a horned quadruped on whose back is a crouching wolf/dog with curling tail. The ground in front of the horned animal and between its legs has not been cut back.

Below the incised border the lower panel contains a Fall scene. The female figure to the left is clothed in a short kirtle and reaches to pluck a fruit pellet from the tree. The right-hand figure, who is not clearly clothed, grasps a branch. A snake coils to the left of the tree. The ground around this scene has not been completely cleared. 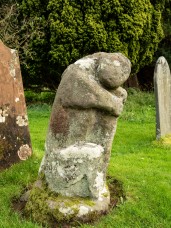 The bears are a genuine mystery, no one really knows their origin or meaning. This is from the St Andrew’s church website

The Dacre Bears are a special feature at St. Andrew’s. There are four stone statues located within the churchyard. A recently expressed archaeological opinion is that they are pre-Saxon and may originally have marked the boundaries of some pagan sacred site, however, the origin of the Bears is unknown and has been a puzzle for centuries.